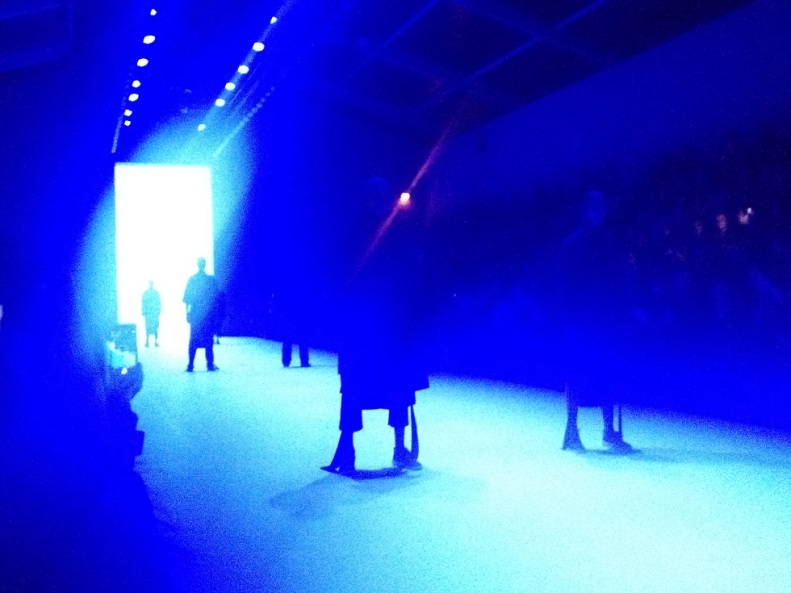 bets were high on sasa kovacevic aka sadak making a run to become mercedes-benz fashion week berlin‘s most exciting designer, and boy did he live up to the hype! his kick-off runway show heavily alluded to the most pressing issue of the present age, infusing his clearly berlin-inspired style with elements of middle east and northern african culture. the results were strikingly contemporary, universal, and ready to create a better, stronger mainstream. fashion at its best.

the buzz immediately died with ivanman‘s presentation at second stage me collectors room. while his color-blocking can feel fresh especially in the winter season, the screaming confrontation superbold red and green with a nasty ocher felt unnecessarily brutal and simplistic.

back at the main tent, everybody was ready to have their heads set straight by lena hoschek, who used to own proper and sexy in self-confident rockabilly shows forever a little kinky. however, this time around, her collection, despite (or, partly, because) the enormous amount of looks, felt murky and cheerless, even prude.

nothing good at all can be said about the runway presentation sportalm kitzbühel. the austrian label, a big player in both the ski wear and the dirndl segments, felt dramatically out of place with a show catering to a crowd that clearly will never even get near a fashion week event. a return for summer season is already more or less a sure thing. frightening.

thankfully, way more in line with the city and people surrounding it were odeur, who have long been represented by berlin mainstay boutique temporary showroom. the swedish streetyle brand’s new collection, confined strictly to black, white, and midnight blue, was clean and simple and needed a strong cast to get its charme across. which it got.

it was also on the cast’s shoulders to carry isabell de hillerin‘s presentation at the berliner mode salon at the kronprinzenpalais. focusing on long, heavy styles in dark, moody colors, the classy collection might lack the spark that would make it a winner, yet the tender, exquisite models created a beautiful contrast and turned the show into a deeply sensual experience.