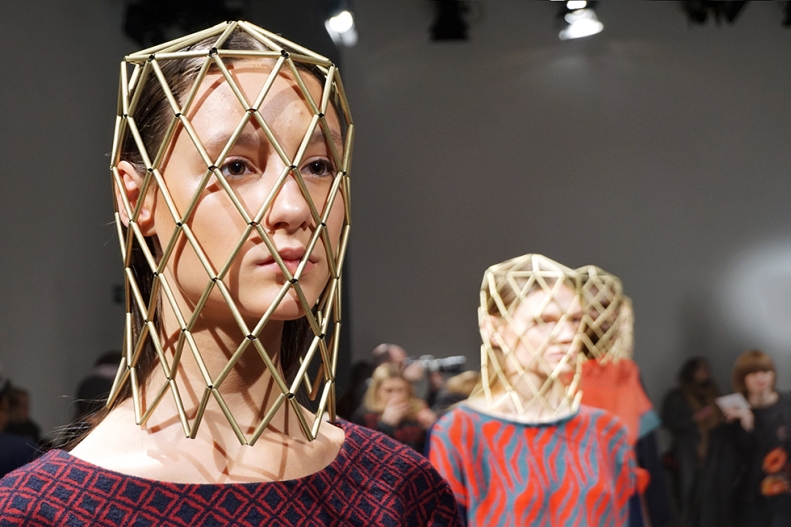 what a way to kickstart the day: to the tune of live electropop (and a flashy guitar), maisonnoée put empowering looks with strong contrasts – leather with knitwear, black on olive, midnight blue and carmine red, long coats over tight blouses – on a selfconfident cast who clearly enjoyed what they were wearing.

things stayed exciting with mariana jungmann at the second stage. the mexican designer showed that winter fashion doesn’t have to be moody – at all. incorporating latin american elements and citing latina legends frida kahlo and monica piloni along the way, jungmann’s collection played on a broad color palette and a wide range of materials, culminating in a series of stunning all-lace, see-through gowns that have become her trademark.

the joy continued and turned into an outright party at anne gorke‘s bombastic show. pumping live beats and a couple of veiled breakdancers set the stage for a collection firing on all cylinders. named “dye and the sky”, it played on a perfect indian summer’s exuberant palette of brilliant reds, tender rosé, mellow gray-blue, and warm brown, delicately dashed out across styles that perfectly melted street coolness and everyday elegance. it helped, too, that gorke managed to assemble one of the prettiest casts that ever carried a show at mercedes-benz fashion week berlin. wow. wow. wow.

funny enough, the colors pretty much stayed the same later when whitetail presented their latest collection in an installation that didn’t allow the models to move even an inch – a task they impressively mastered under their chain masks. unfortunately, this killed most of their charme, too – a prop the pleasant, but rather unspectacular wool collection would have done better with than stoic denial.

back at the tent, turkish designer emre erdemoğlu took us back to the club with an upbeat white-and-silver collection that kept the pitch high and the atmosphere fun.

finally, the very last show of this season’s presentations at mercedes-benz fashion week berlin was a one-of-a-kind group show representing the talent at renowned college of design at taiwan’s shih chien university. the extremely diverse runway show demonstrated how much interpretations of what fashion can be and achieve can vary. a full picture perfect post from backstage can be found here.