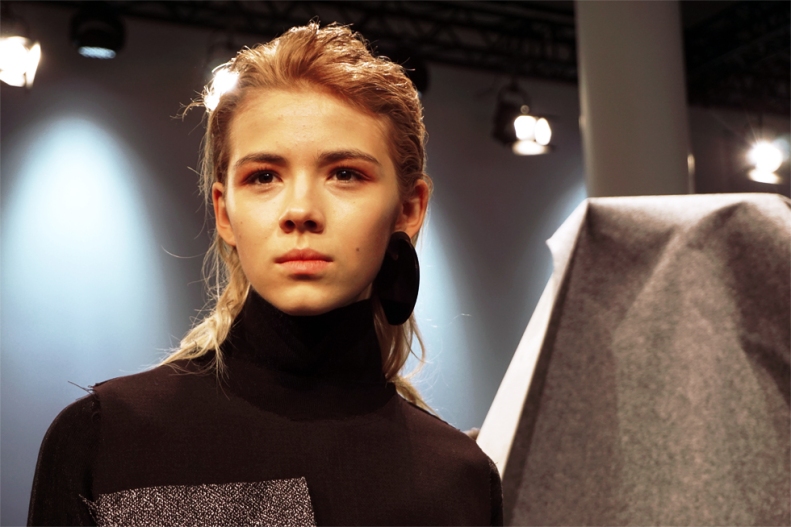 after we spent day two of this edition of mercedes-benz fashion week berlin focusing on a backstage production at rebekka ruetz‘s show, we inserted ourselves fully into the buzz of fashion week again.

the day got going with a brief runway show by newcomer xavi reyes, who let his grandparents’ tablecloth inspire his lacey designs. his approach to fashion felt promising, but the execution lacked strength of purpose.

after this we found ourselves in a jam: is was either steinrohner and the magnificent dimitri – or the latest collection by marina hoermanseder. we went with the latter – and found ourselves disappointed. make no mistake, with the quantum leap that was last summer’s presentation, the austrian designer might have arrived at perfection. yet it was still a pity that her new collection, inspired by pioneering lady pilot amelia earhart, felt complacent and didn’t test new waters except for a few outstanding pieces (including an enormous white fur coat). instead, hoermanseder reached high with the staging – and took a fall. the idea to use several halls on two floors (the models used elevators individually!) at the kronprinzenpalais was grand, but created long pauses who killed impact and atmosphere.

philomena zanetti‘s show, presented at the stage at me collectors room, was gray and drab and did not touch us at all. nuff said.

thankfully, back at the big tent (we had to skip perret schaad, who went offsite to an hardware store of all places), ewa herzog was as sensual and pleasant a cookie as she has always been, her designs overtly feminine, the cast lavishly styled. it was far from being progressive, but damn did it feel good to be picked up emotionally again.

and back to the stage it was on an extremely tight and packed schedule. holy ghost have never let us down and once again played their cards – warm colors, soft fabrics, slender cuts – to perfection. “clean, simple and light is the maxim” the rightfully claimed in their show leaflet. word.

zukker’s runway was shorter than the time it took management at the counters to get the guestlist sorted out – and left close to no impression on us.

for the day’s last presentation at the stage, vladimir karaleev went with an installation – a surprisingly rare choice these days it seems? over the last seasons in particular karaleev had managed to become one of the most talked-about designers, yet his latest collection felt like he had taken two steps backwards: incoherend, erratic, and somewhat lazy. his cast was amazing, though: his breathtaking newcomer graces this post.

william fan did much better. at kronprinzenpalais, he actually pulled off the rare stunt of taking the audience on a ride that only gets more exciting the longer it takes. having shown off elegance and pride in the beginning, the show culminated in several showstopping looks, with a shimmering, fully golden pantsuit taking home the price for the day’s biggest wow moment.

tulpen design, finally, congenially capped off an extremel long day in a nighttime party atmosphere. pompous evening gowns, sleek cocktail dresses, and ready-to-wear styles from designer manuel kirchner’s eponymous sub-brand rolled down the runway, as a live dj played along and sent everybody, including us, into a short night.