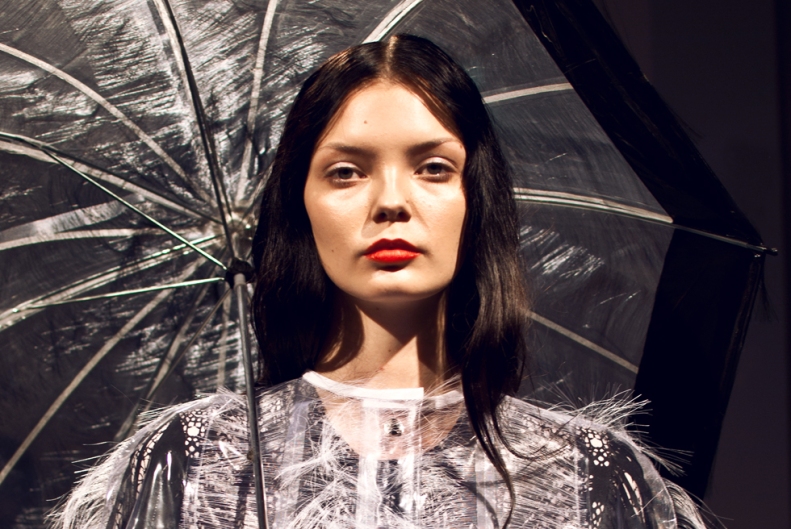 the gorgeousness! this morning, to the humbling backdrop of the kronprinzenpalais, austrian designer marina hoermanseder wrapped the crowd into what felt like the purest idea of beauty one could possibly have. taking her unique style to yet another level, hoermanseder elevated her unique bondage elements to the brightest elegance bathed in nude, mint, rose, and smokey-blue, and brought to ephemeral life by a cast of models so delicate they almost seemed to drift away. it was a dream! it was a it was a miracle! it was one for the ages!

a pause was in place to let it all in, but after that newcomer sammler berlin presented a remote, distinguished runway-turned-installation of classy evening gowns at the second stage. no sparkle here, but solid craftmanship.

back at the tent, ewa herzog, only a few months removed from her hypersexual presentation of next year’s autumn/winter styles, slowed things down with a collection resting almost entirely on fine broidery. all this could have needed to go from good to great was a little oomph in the delivery.

it’s not exactly an imaginative (let alone fashionable) move to build a creative piece of work around modest mussorgsky’s pictures at an exhibition, but it didn’t keep isabel vollrath from adding another interpretation. the results, displayed at the second stage, were at times daring, but presented in such a frantic, unoriented manner it all ended up quite a mess. thankfully, the model cast (featuring stunning new face vanessa hänisch, pictured above for sammler berlin) was terrific.

finally, lilly ingenhoven officially shut the door on this edition of mercedes-benz fashion week berlin with – a tennis collection of all things! unifying the realms of summer evening parties and the centre court, the shows was a light, humorous note that left people anticipating ingenhoven’s next work right away. if only it were january already!